Aggregate Programming is a paradigm for the development of collective adaptive systems (CAS). It provides a compositional, functional programming model for expressing the self-organising behaviour of a CAS from a global perspective. Aggregate Computing (AC) is formally grounded in the field calculus (FC), a minimal core language that captures the key mechanisms for bridging local and global behaviour. FC is based on the notion of a (computational) field, a (possibly dynamic) map from a (possibly dynamic) domain of devices to computational values.

Aggregate Computing is based on a logical model that can be mapped diversely onto physical infrastructure.

In practice, devices sustain the aggregate computation through asynchronous sense-compute-(inter)act rounds which conceptually consist of the following steps:

A code example of round execution in ScaFi is shown in Building Aggregate Systems.

Aggregate computing is a macro-programming paradigm where a single program (called the aggregate program) defines the overall behaviour of a network of devices or agents.

The aggregate program does not explicitly refer to the execution model discussed in the previous section, i.e., it somewhat abstracts from it (though in some cases it may assume that the execution model has certain characteristics). Instead, it expresses how input fields maps to output fields: for instance, how a field of temperature sensor readings maps to a field of warnings; or, as another example, how a field of service requests and resource advertisements map to a field of task allocations.

A paradigmatic example is the Self-Organising Coordination Regions pattern, where a situated system is split into leader-regulated areas, where each leader collects data from devices in its area and orchestrates the activity in its area. An aggregate program to realise this pattern could be as follows in ScaFi:

Notice that each value is conceptually a field (i.e., fields are a global denotation of program inputs, outputs, and intermediate results). For instance, the Boolean value leader will be true or false locally at each device according to whether that device is a leader or not; globally, leader can also be interpreted as a Boolean field denoting leaders. The same goes for the other values as well: distanceToLeader is the field of minimum distances from leaders; followedLeader is the field mapping each device to the leader it currently follows; data is a field of maps mapping devices to corresponding data items (here, we abstract from type Data).

As another example, consider the following steps.

Step 1: Add the dependency to scafi in your project (e.g., via sbt)

Step 2-1: Import or define an incarnation (a family of types), from which you can import types like AggregateProgram

Step 2-2: Define an AggregateProgram which expresses the global behaviour of an ensemble.

Step 2-3: Use the ScaFi internal simulator to run the program on a predefined network of devices.

Alternatively, you can use the approach taken in Building Aggregate Systems. Indeed, an AggregateSystem object can be seen as a function from Context to Export: you give a certain context, and get some export. The export must be passed to neighbours so that they can build their own context and re-interpret the aggregate program.

Step 2-4: After a simple investigation, you may want to switch to a more sophisticated simulator, like Alchemist. Take a look at Alchemist simulator for details about the use of ScaFi within Alchemist.

From a deployment perspective, ScaFi consists of the following modules:

The whole structure is resumed in the following picture:

The modules to be imported (e.g., via sbt or Gradle) depend on the use case:

Here, we explain the basic constructs of the field calculus, which are the core of the aggregate programming paradigm. By combining these constructs, higher-level functions can be defined to capture increasingly complex collective behaviour.

This trait is implemented by AggregateProgram (the class to extend for defining new aggregate programs). In summary:

Now let’s consider a progression of examples to help you get acquainted with the programming model and the aforementioned constructs. Notice that these examples can be run on ScaFi Web.

In ScaFi a usual expression such as, for instance,

is to be seen as a constant uniform field (since it does not change over time and does not change across space) holding local value 3 at any point of the space-time domain. More specifically, this denotes a global expression where a field of 1s and a field of 2s are summed together through the field operator +, which works like a point-wise application of its local counterpart.

Running the above program by an aggregate system will produce the following result, where the output of the program is shown as a value for each node. 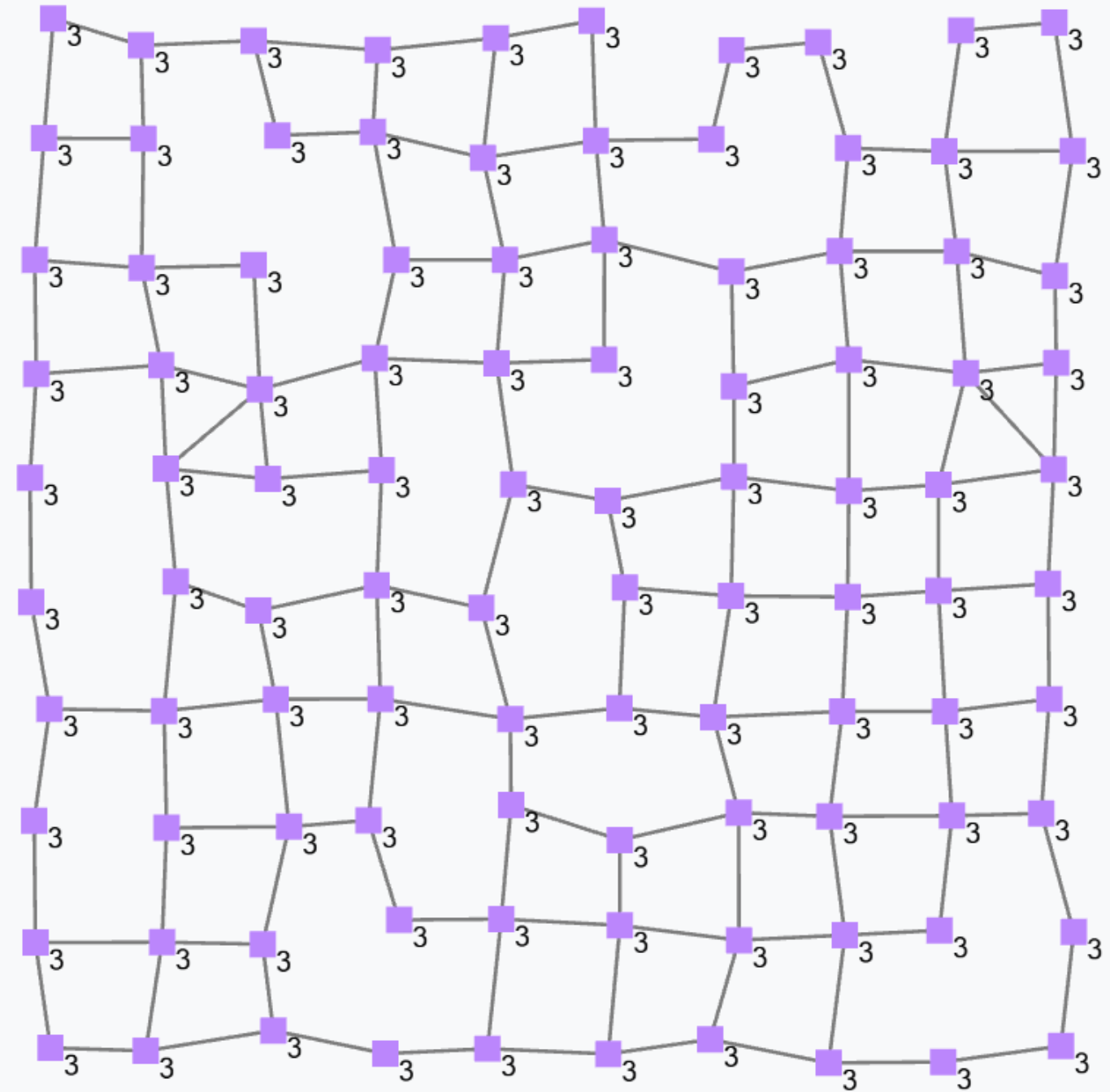 A constant field does not need to be uniform. For instance, given a static network of devices, then

denotes the field of device identifiers, which we may assume it does not change across time but does vary in space: so, it would be a constant non-uniform field. 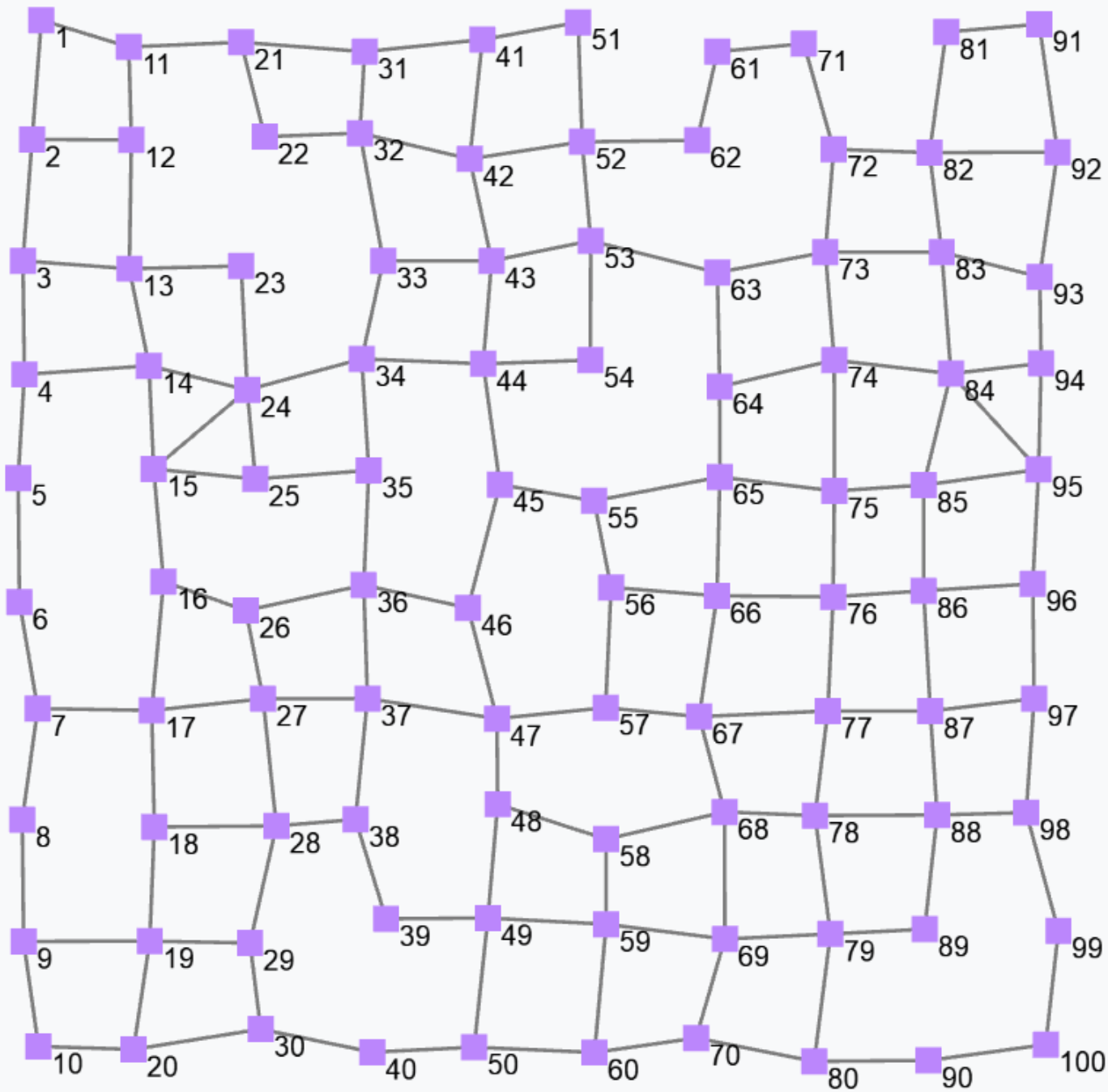 Non-constant fields can be generated by querying sensors in non-stationary environments and can also be programmatically defined by the rep operator; for instance, expression

counts how many rounds each device has executed. Indeed, the first time the rep expression is evaluated at some device, x is bound to 0, and the expression evaluates to 0+1=1; the next round on the same device, x is bound to 1 (i.e., to the value of the expression in the previous round) and the expression evaluates to 1+1=2; and so on. It is still – in general – a non-uniform field since the update phase and frequency of the devices may vary both between devices and across time for a given device. The following figure shows a snapshot of a field generated by the above expression.

Notice that if we assume a bulk synchronous execution model, the output of the above expression would be a non-constant but uniform field.

which outputs a tuple where the first element is the device ID and the second element is a set obtained by collecting, in each node, the set of IDs of its neighbours. 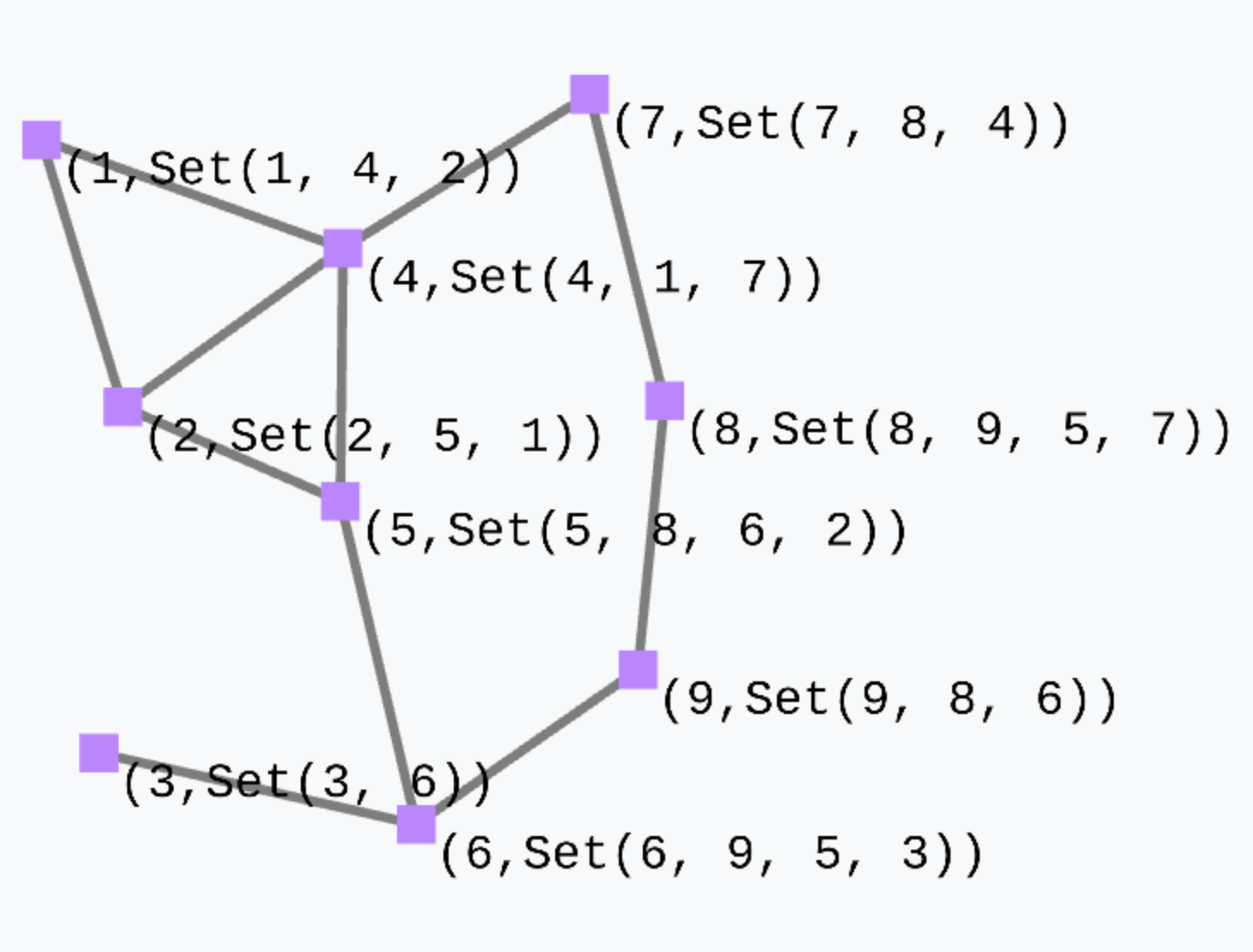 There is a variant of foldhood which is called foldhoodPlus which does not consider the device itself when folding over the neighbourhood.

Local to global: the case of the gradient field

Collective intelligence can be programmed by letting the local affect the global and vice versa. This operation is supported by combining rep with foldhood and nbr.

To illustrate this combination of operators, we provide the paradigmatic example of the gradient field, which is the field of minimum distances from any node to its closest “source node”.

The output of this gradient (once stabilised after some rounds) is as follows.

Such a gradient algorithm is self-healing: perturbing the network (e.g. moving nodes, changing sources) will make the gradient adjust to eventually converge to the “correct” field.

The ScaFi simulator engine is quite basic.

The idea for its usage is to leverage a factory, object simulatorFactory, to build a simulation NETWORK object, upon which various exec methods are available for scheduling computation rounds on the devices. On a network, there are also methods like addSensor and chgSensorValue for programming the sensors of devices.

For the usage of the graphical simulator, consider the following example:

By running the SimulationRunner program, the simulator will show up. Setting Settings.ShowConfigPanel can be used to configure whether a launcher window has to be shown or not. In the latter case, the simulation will immediately start by running program Settings.Sim_ProgramClass through a default simulation model (random network with random sequential scheduling and instantaneous, perfect communication with neighbours at the end of each round).

The ScaFi specific part in an Alchemist simulation descriptor is as follows:

NOTE: the send program is needed, otherwise there would be no communication among devices, preventing the unfolding of the aggregate logic.

NOTE: the ScaFi incarnation does not attempt to create defaults for undeclared molecules. So, you need to declare all your molecules (including exports–otherwise, the exporter component will try to export a yet-to-be-created molecule) before accessing them (e.g., be sure to perform a node.put() before a corresponding node.get()), or the following error might occur The molecule does not exist and cannot create empty concentration.

A full Alchemist simulation descriptor is as follows (node: refer to the Alchemist Documentation for more up-to-date information):

The major challenge in building aggregate systems is dealing with distribution.

The following activites must be implemented

Many of such activities are application- and deployment-specific, so it is not easy to come up with a general middleware solution. However, we are working on it.

Take a look at the following paper for middleware- and deployment-level considerations:

The ScaFi standard library is organised into a number of modules such as:

To use a library component, just mix in your aggregate program class using the keyword with:

Block S (Sparse-choice) is used to perform a decentralised leader election on a spatial basis.

The previous snippet is used to elect leaders with a mean distance of 100 metres between two leaders. The output is a Boolean field that is true in correspondence of devices that are currently leaders. Leaders are shown in red in the following figure. 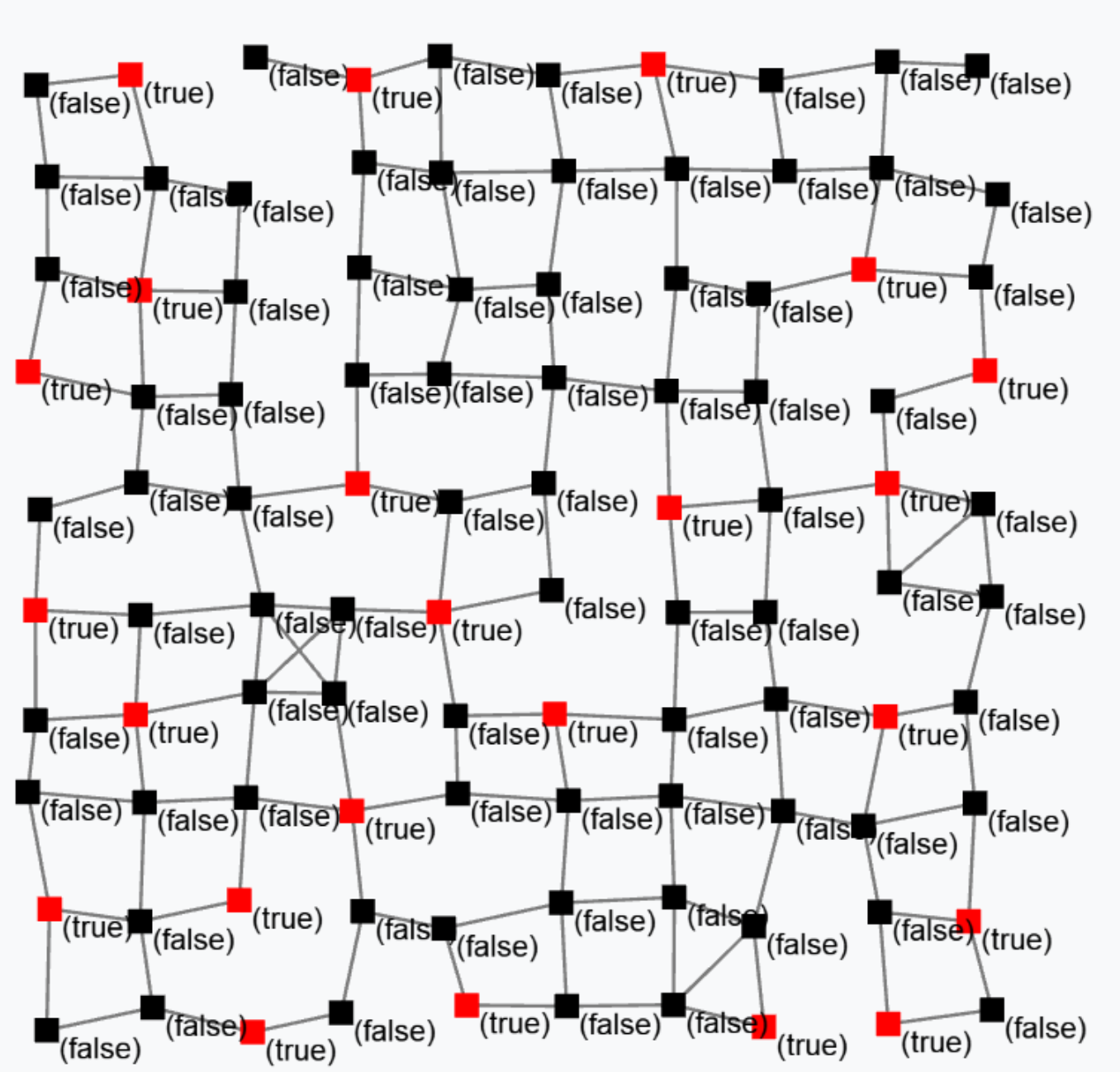 Contributions to this project are welcome. Some advices:

Once you have cloned your ScaFi repository, you can build the project using sbt.

You can run tests: